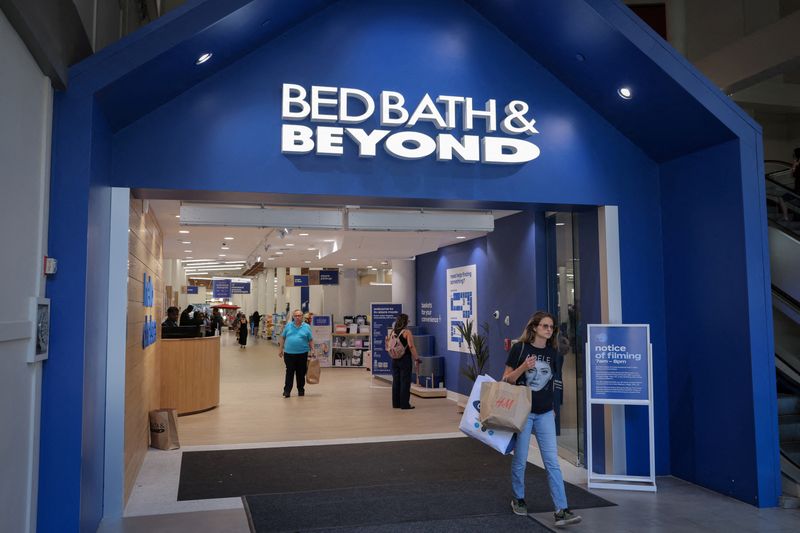 (Reuters) -Bed Bath & Beyond Inc has been in talks with prospective buyers and lenders as the struggling retailer tries to keep its business afloat ahead of a likely bankruptcy filing, CNBC reported on Wednesday.

The company is in the midst of a sale process to find a buyer that would keep business running at both its eponymous store banner and its buybuy Baby chain, the report added, citing people familiar with the matter.

The home goods retailer’s advisers are also looking for a loan of at least $100 million ahead of a potential bankruptcy filing, which could occur in the coming weeks, the report said.

Bed Bath & Beyond said in an emailed statement to Reuters that it does not “comment on speculation or specific relationships”.

The New York Times reported last week that the Union, New Jersey-based company was in talks with private equity firm Sycamore Partners for the sale of its assets, including buybuy baby stores, as part of a possible bankruptcy process.

While Sycamore is especially interested in the buybuy Baby chain – which helped Bed Bath & Beyond get a $375 million loan last year – sale of the company as a whole is also being considered, although with a much smaller footprint of stores than it currently has, the CNBC report said on Wednesday.

Authentic Brands, owner of fashion labels including Forever 21 and Aeropostale, has also been looking at Bed Bath & Beyond, the report said. Authentic Brands declined to comment.

Bed Bath & Beyond earlier this month posted a much bigger-than-expected quarterly loss and saw a plunge in sales, and said it would lay off more employees to cut costs as it struggles with a dwindling cash pile.

(Reporting by Deborah Sophia in Bengaluru; Editing by Devika Syamnath)