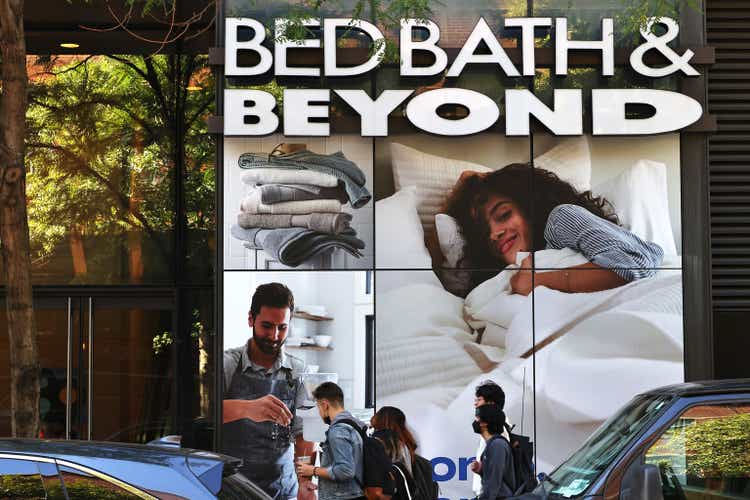 Bed Bath & Beyond (NASDAQ:BBBY) has lost more than 60% from its market cap in the last 12-month period. In our view, this selloff is justified, not only because of the current macroeconomic environment, but also because of the poor financial performance of the firm.

In this article, we will highlight a few reasons that we believe make BBBY’s stock an unattractive choice right now.

In the first quarter of 2022, BBBY has reported disappointing financial results, significantly impacted by the current macroeconomic and geopolitical situation.

The net sales in the previous quarter were approximately $2 million, more than 20% down year over year. Also, the digital channel sales have declined significantly by about 18%. Not only this quarter was weak in terms of sales. In fact, BBBY’s revenue has been continuously declining in the last five years.

Not only revenue has been trending down, but also cash flow from operations has decreased by more than 95% in the last 5 years.

According to CEO Mark Tritton, the primary drivers of the disappointing sales figures were the challenges with inventory. The global supply chain disruptions and the emergence of the Omicron variant led to a significant amount of inventory being trapped in transit or held in ports. The ongoing tension in the Eastern European region is likely to further worsen the situation in the next quarters.

The chart above clearly indicates that BBBY has been struggling with the inventory management, resulting significantly lower inventory levels than in the years before.

In our opinion, the challenges mentioned above are likely to remain for the rest of 2022. We also do not expect any increase in sales as the consumer confidence has been sharply declining in the last few months, reaching a 10-year low, and even approaching levels seen in 2008-2009.

Further, the firm is currently going through a transformation started in 2021, aiming to fundamentally rebuild its business. Although the efforts are focusing on the long term, primarily on technological and supply chain improvements, we are yet to see the result.

All in all, we believe that the current macroeconomic environment, coupled with the inventory problems and the significant decline in consumer confidence, is likely to prevent BBBY from turning its business around. As long as these challenges persist, we remain bearish on Bed Bath & Beyond’s stock.

Both the core inflation rate and the gasoline prices seem to have peaked in March, however, remain well above the figures observed in the last years. These factors, combined with the additional costs associated with the supply chain disruptions, have caused BBBY’s large margin to decline in the last quarter by 400bps.

Important to mention that the quarter reported ended on February 26th, meaning that most of the negative impacts propelled by the political tension in the Eastern European region are not yet reflected in these results.

In fact, this quarter was not the only quarter, in which margin contraction has been an issue. The firm’s margins have been continuously trending downwards in the last ten years.

In its 2022 outlook, the firm has foreseen an improvement of the supply chain disruptions resulting in higher adjusted EBITDA and gross margin, however, in our view, the economic macro headwinds are likely to remain a negative influence in the rest of 2022, therefore we do not foresee any significant improvement of the margins or sales in the near term.

The current ratio of BBBY is 1.14, the quick ratio is only 0.21, while the total cash of the firm is approximately $440 million with debt totaling more than $3 billion.

When evaluating the liquidity of the firm and its financial flexibility in the near term, we like to see current and quick ratios above 1, although it is not uncommon to see lower figures in the home furnishing retail segment.

Important to point out that although the current ratio is above 1, it includes inventory. As we have seen in the first quarter, there are several problems related to inventory. The first question is whether the available inventory could be turned into cash in a timely manner and at a fair price. As we have seen, the demand for BBBY’s available products was not particularly high, which may indicate that their available inventory may be partially obsolete. The second question is, how long the supply chain disruptions will last. The longer their inventory remains in transit or held at ports, the higher the associated costs will be, and the firm may not be able to convert it into cash in a timely manner.

In our opinion, there are too many uncertainties and unanswered questions regarding the inventory, significantly influenced by the supply chain disruptions. Further, we think that the liquidity of the firm is not particularly strong, therefore, we are also bearish on BBBY’s business from a liquidity point of view.

The firm is also not an appealing candidate from a value point of view. The enterprise value to EBITDA (forward) of the firm is approximately 55x, compared to the sector median of 7x. In our opinion, there is no reason for this firm to trade at such a high multiple compared to the sector median. The same trend can be observed in P/CF. Further, in both metrics, BBBY is trading significantly above its 5-year averages.

Based on valuation, we also believe that the stock of BBBY is not worth owning at the moment.

Bed Bath & Beyond has been struggling with declining sales and declining earnings in the last couple of years. In order to turn the business around, the fundamental transformation of the business has been envisaged, by implementing technological and supply chain improvements. So far, we have not seen the positive results of the strategy.

Due to the current macroeconomic environment, including rising prices and supply chain disruptions, BBBY’s margins have been contracting in the last quarters. Margin contraction has been an issue for the firm in the entire last decade.

Due to the inventory management issues, the relatively low amount of cash on hand, and the low quick ratio, the firm may face liquidity problems and may have limited financial flexibility in the near term.

As the uncertainty in 2022 remains high regarding all the above-mentioned topics, we believe the stock is currently a “sell”.