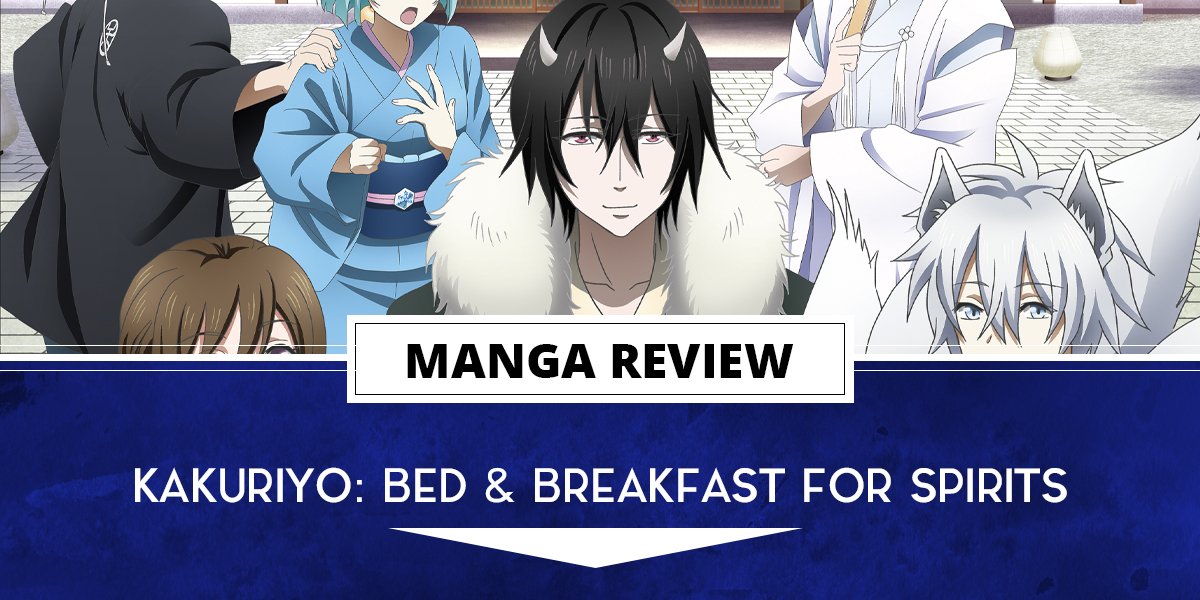 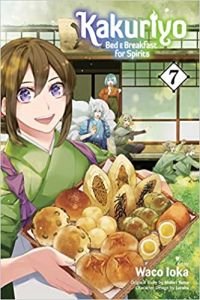 It has been sixteen months since we last saw a volume of Kakuriyo: Bed and Breakfast for Spirits; however, despite the large time gap, as soon as I started reading, I instantly remembered where we left off!

Volume seven of Kakuriyo sees Aoi and Gingi return from The Eastern Lands. Here, they decide to make bread.

Okay… so there is a little more to this volume than that but, yes, the majority of the volume focused on Aoi making bread and convincing people it wasn’t like the bread her grandfather used to pass out which was hard as a rock. Aoi does get paid a visit from Ritsuko, though, and she imparts a pretty neat little secret… that when you eat the food of the Ayakashi, you gain a little bit of their spiritual power and, thus, as a human, will live just a little bit longer as the spirit power slows down your aging.

The Odanna also pays Aoi a visit wanting to eat some noodles to conclude his star festival. He ends up falling asleep on the front porch of the restaurant but not before muttering something about Aoi being special. This ties into the Ayakashi spirit power in the food and something about Aoi already being an Ayakashi before being summoned to Kakuriyo.

There is a brief moment that heavily hints at what happened but more to be revealed in another volume, I would assume.

The volume ends with the Odanna having to take his leave so he leaves Sasuke in charge of the garden and security and will have Ginji fill in for him. Aoi is to be a guest at the inn where she is shown to her bath and then… well… that’s it.

Not much of a cliffhanger but this series really isn’t known for them.

The biggest focus here was on both Ritsuko and Aoi. For Ritsuko, we learn about how she and Nuinoin came to become a couple and the sweet thing he does by changing his appearance to match hers so that she doesn’t feel as if she’s aging too fast. This is how the Ayakashi Spirit Power gets explained and offers up a hint as to why other Ayakashi are after Aoi’s life. In case it’s not painfully obvious, she contains a ton of spirit power in her body so, naturally, those who want to live longer have a desire to nom nom on her!

Aoi, on the other hand, learns about her having a tone of spirit power from the Odanna. He won’t say why or how but as I alluded to earlier, there is a bit of a dream/flashback scene that pretty much explains how she got that power and who is behind it.

It’s been a good while since the previous volume but while we got some interesting pieces of information about Aoi… there really wasn’t much to this volume. All I know is that I want some mini bread loaves stuffed with teriyaki chicken now because that sounds absolutely amazing! I also like how she fed Akatsuki a simple egg sandwich and, yet, the manga made is sound as if it were some elegant, yet, high-class dish! It was literally a square omelet on white bread with mayo and mustard. Knock yourself out making it at home. The fact that she didn’t even put cheese on it is a travesty!

Looks like in the next volume, we are going to get Aoi’s experience with being a guest at Kakuriyo. She’s going to sample one of their biggest meal sets, too! I’m hoping we get some more tidbits surrounding Aoi’s past as I think the whole “well, my grandfather was known for…” is getting a bit stale now. I think after seven volumes, we kind of get the picture with him already. I would put a lid on his backstory and start focusing more on Aoi, but that’s just me.

Another solid volume. I just hope we don’t have to wait forever and a day again for the next. Speaking of volumes that haven’t come out in a while… where’s Not Your Idol Vol. 3? hmm…

You can also check out other The Outerhaven reviews on your favorite social media networks:

This item was purchased for review.