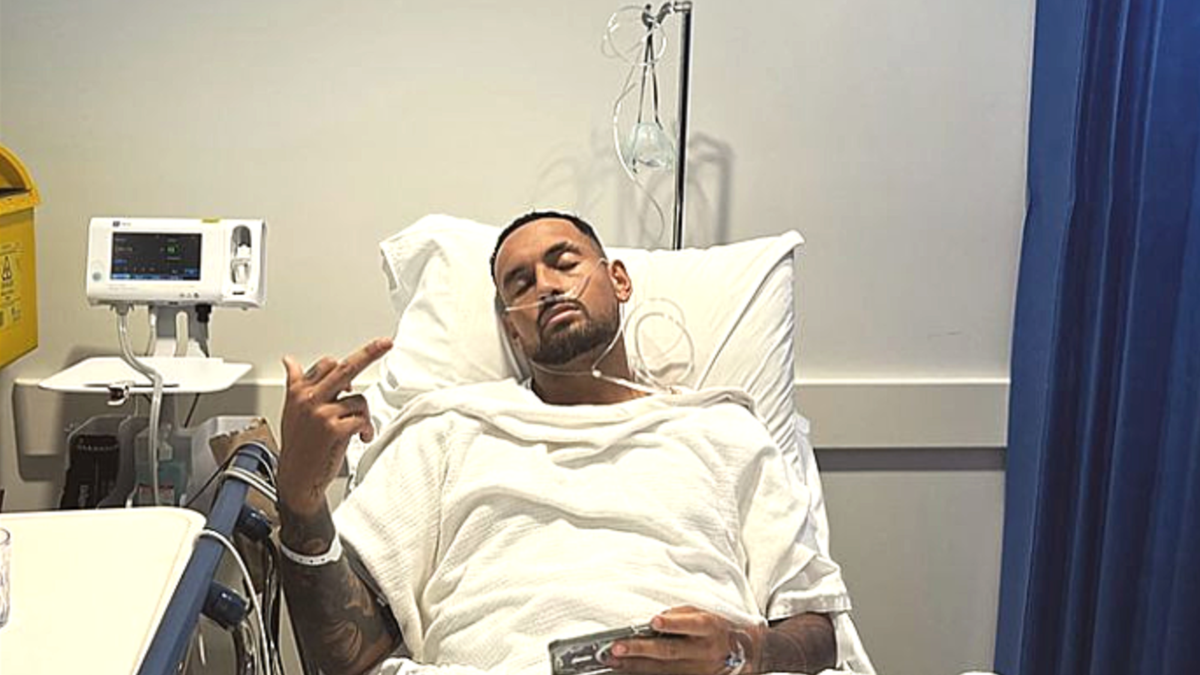 Tennis star Nick Kyrgios has shared a health update from his hospital bed in Canberra.

As with nearly everything Kyrgios does, the update came with a little a bit of controversy, too, raising his middle finger for a photo that was posted on Instagram.

WATCH THE VIDEO ABOVE: Nick Kyrgios caught in lewd act with partner Costeen Hatzi on camera.

Kyrgios had a parameniscal cyst growing on his lateral meniscus – the result of a small tear, his physio Will Maher recently explained.

The cyst has now been removed from his knee as Kyrgios aims to be fit for the Indian Wells Masters in March.

“I’ll be doing everything I can do get back to my best. To the real ones checking in and sending the vibes…. I love you ❤️.”

Costeen Hatzi, the partner of Kyrgios, also posted an image of her boyfriend with words, ‘Poor baby’.

Maher said ahead of the operation: “It’s not a significant injury in the sense that it’s going to be career-threatening or anything like that.

“Even at that stage (ahead of the Australian Open), it was worth persevering to see if we could get him back on court. To Nick’s credit, he did try everything.

“He was having (the knee drained) where they use a syringe to try to drain the cyst. Nick has some pretty gruesome photos, I’m sure he’ll share them later.”

Kyrgios was expected to contend for the Australian Open but he had a disrupted build-up due to the previously undiagnosed knee issue.

“I’m extremely disappointed … I’m just exhausted from everything,” he said when it was revealed he would miss the tournament.

Ahead of the Australian Open, Kyrgios was widely criticized when he pulled out of the United Cup.

But there had been no genuine suggestions that Kyrgios would miss out on the grand slam until a ‘routine MRI’ revealed the extent of an injury.

In December, Kyrgios hinted that he could play doubles with Novak Djokovic in the US at the Indian Wells.

Djokovic was banned from the US Open due to his unvaccinated stance, so that nuclear pairing hinges on a change in government policy and the fitness of both players.

Murray bows out of open with ice-cold handshake: ‘Clearly dislike each other’