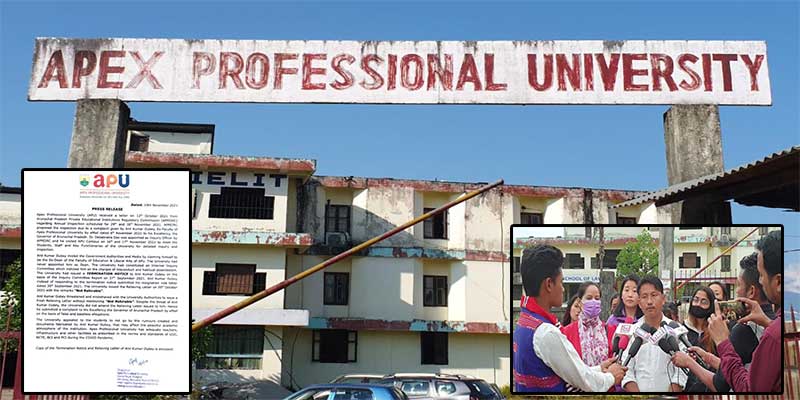 PASIGHAT (By- Maksam Tayeng) – According to a press release by the Registrar of Apex Professional University on Nov. 19 stating that the university has adequate teachers, infrastructure and other facilities in accordance with the norms and standards of UGC, NCTE, BCI and PCI and also Dr. Accusing Anil Kumar Dubey of misleading the students, the student community has hit back, claiming that the APU is covering up its shortcomings.

The students accuse the registrar, Apex Professional University (APU), of making a false statement in the press release because the university never had adequate teachers and infrastructure as the registrar claims. In a press conference on Sunday, the students reiterated that the university management is making every effort to address their inadequacies and misconduct of irrelevant fee collection, unavailability of adequate teachers and infrastructures in accordance with the standards of NCTE, PCB. to cover up and PCI etc.

Tabi Gao, General Secretary of the Adi Mising Students’ Union, who petitioned the Chief Secretary and Secretary, Education, have reiterated that the gross fraud and fraudulent activities are being carried out by the APU management, for which the students have a CBI – or a similar investigation has requested the APU to bring the truth to light so that the poor students of Arunachal Pradesh and neighboring Assam will not be pillaged in the name of education in the future.

Other girls also spoke to the media about the mismanagement of the APU authorities and the poor education system where grades are bought with money / fees. While providing a clip of a voice over recording by Lani Das, the personal secretary and legal advisor to Dhanwant Singh, APU Founding Chancellor, the students also alleged that she (Lani Das) tried to put pressure on Dr. Anil Kumar Dubey to exercise the appeal to withdraw from the governor of Arunachal Pradesh.

When contacted, Dr. Anil Kumar Dubey, who is currently in his home state, Uttar Pradesh the attempt of Lani Das and the new Vice Chancellor Dr. Mridul Hazarika. Dr. Dubey said that Das phoned him at the APU the day before the Arunachal Pradesh Regulatory Commission investigative team arrived on Nov. 16 and asked him to withdraw the complaint.

“Both Lani Das and Dr. Hazarika met me in Dangaria Baba Mandir, Raneghat Area and asked me to withdraw the complaint. When I refused, they told me that Sardar (Chancellor) will not spare me and that false charges will be brought against me. I did not give in to their pressure and request, however, as I care for the well-being of the students, having witnessed students being ransacked by APU management on behalf of drafting fees and others, ”added Dr. Dubey added to demand justice for him and students.

Dr. Dubey also announced that his salaries were withheld and not paid for 2-3 months citing absence from APU management, while he explained his reason for his absence by sending mail and medical reports and photos of admission to medical treatment directly reported from the hospital bed Babu Ishwar Saran District Hospital, Gonda, Uttar Pradesh. Several false police complaints were also filed against Dr. Dubey filed with the Pasighat Police Station. But dr. Dubey made it clear that all of these allegations were made against him by Lani Das and Chancellor Vijay Kumar Tilak, only to mock and prosecute him, as the same action was previously warned by Lani Das. Teaching and non-teaching staff of the APU will be marked as absent and salaries will be cut or deducted if one of the employees arrives at the university 5-10 minutes late, which is also an exploitation and injustice towards the university staff, shared Dr. Dubey with.

“I was asked to collect Rs. 5000 each from the B.Ed. Handing out students for enlistment fees, but I protested when students came up to me and some cried and said they had paid enough already and poor students couldn’t pay. And by my calculation, almost 200 B.Ed. Students have already paid more than Rs. 2,00,000 (two lakhs), each around Rs. 40,000,000 (four crores) and APU management should pay the drafting fees out of these fees as even 5% of the total fee collection is not spent on hiring / teaching staff will. My salaries were withheld just because I failed to collect fees from the students, ”added Dr. Dubey added sadly.

Read this too – Apex Professional University is holding its fourth convocation

Dr. Dubey hopes, however, that the APU will correct their mistake and, after the investigation against the university, will continue to work for the benefit of the students, as this situation gives them the opportunity to examine themselves. “The students are close to my heart, so I did not withdraw the complaint, as it would be a kind of injustice to the students of the APU, for whose good I spoke out against the irrelevant fee collection direction of the APU management, according to which my salaries were withheld . Once when I questioned the Chancellor and suggested correcting the APU’s wrong policies and mismanagement, I was warned by the Chancellor to be silent while explaining that he can easily get by at all levels (civil servants and MLAs / ministers) himself if I complain anywhere, ”continued Dr. Dubey.

It is noteworthy to add here that a non-faculty of the APU, wife of the APU Registrar, who recently graduated as a faculty in Daying Ering B.Ed. College was Pasighat also as a faculty among the faculties of B.Ed. Department, as an official with the APPEIRC investigating the number of B.Ed. Faculties. However, the scam was exposed and identified by the students when their facial muscles were removed to alert the students. While Dr. Dubey also informed that Vijay Kumar Tilak, Registrar of the APU, also as Asst. Prof. von D. Pharma, which is against the norms as Tilak does not have the required qualifications.

Students and Dr. Dubey have made many such mismanagement allegations against APU management which are now of serious concern and warrant a thorough investigation by a lawfully competent authority.