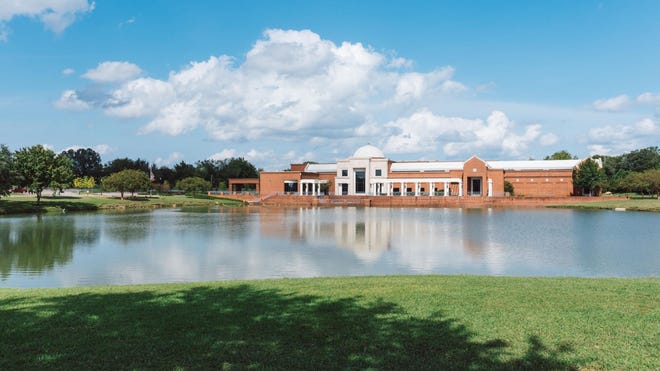 A huge variety of music is ahead for the week of Aug. 8-14 in Montgomery, plus art, comedy and a chance to hit the town without pants. Seriously. Check it out on this week’s The 10:

Paint and Pour on Tuesday for Art After Five

Join the Montgomery Museum of Fine Arts for Art After Five: Paint and Pour on Tuesday from 6 pm to 8 pm Young adults are invited to join artist and MMFA operations manager India Wilson, who will lead a painting workshop inspired by a work from the museum’s permanent collection.

He’s been called observational, self-deprecating and sarcastic. Come Thursday at 7 pm, you can also say Brian Regan is here, with his special blend of stand-up comedy, at the Montgomery Performing Arts Centre. This is a show you can bring your grandma to see. Regan’s funny, but he’s known for clean shows full of sophisticated comedy and physicality. Tickets are $45.50 to $55.50. mpaconline.org

No pants, no problem at GTSouth on Friday

It’s been dang hot outside, so guys ought to be looking for any excuse to catch the breeze. Why not try going without pants for the evening? Now’s your chance on Friday, from 9 pm to 2 am, at GTSouth Geek & Gaming Tavern, 2015 Cong. WL Dickinson Drive, Montgomery. It’s a pantless celebration of owner Pineapple Mike’s birthday. Guys, it’s time to improvise. Wear skirts, dresses or other sexy outfits. Maybe a kilt. DJ Abuniverse is on the scene. This is for ages 21 and up.

Stoney LaRue brings his brand of country to MPAC

Born in Texas, raised in Oklahoma, and now singing in Montgomery. Stoney LaRue’s a Renaissance man of country music, and his new album, “Onward,” is a step forward. (His last album was in 2015.) He’s been keeping busy doing more than 200 live shows a year, and he’s coming here on Saturday at 7 pm at Montgomery Performing Arts Centre. Tickets are $17-32. mpaconline.org

If you’re in love with the sounds of Mexico, and maybe you’ve been inspired by the ongoing production of “American Mariachi” at the Alabama Shakespeare Festival, then you ought to catch El Fantasma on Saturday at Rancho El Paraiso, 1890 Snowdoun Road, Montgomery. Rising star Alexander Garcia (who performs as El Fantasma, which translates as “The Ghost”) is a native of Las Cañas Durango, México. He’s known as the “King of the Underground” and has been dropping music since 2016. He’ll be joined by Gerardo Diaz, Salazar and Los Dos for a huge night. Tickets are $70. ranchoelparaisoalabama.com.

A Site of Struggle: Opening reception and discussion

Get ready to join the conversation about the exhibit, “A Site of Struggle: American Art against Anti-Black Violence,” on Saturday at 2 p.m. at the Montgomery Museum of Fine Arts. Rhonda Sewell, the Toledo Museum of Art’s first director of belonging and community engagement, will be joining Janet Dees, the Steven and Lisa Munster Tananbaum curator of modern and contemporary art at The Block Museum of Art and curator of the “Site of Struggle” exhibit . It’s a conversation about the process behind the exhibition and its themes. The museum will hold a reception afterwards in the rotunda.

It’s a new name at a new location, but beautiful, inspiring photography is the same by any name. Opening Saturday and running through Aug. 27, the Montgomery Photo Festival — formerly the Society of Arts & Crafts/Stonehenge Gallery Photo Competition — is presented by the Society of Arts & Crafts in downtown Montgomery at the Kress building, 39 Dexter Ave. They’ll hold a reception Saturday at 6 pm montgomeryphotofestival.org

Get to know magical creatures at the zoo

You love the magical animals from films like “Harry Potter” and “The Hobbit.” Here’s the chance to see them in real life on Saturday, from 10 am to noon at the Montgomery Zoo and Mann Wildlife Learning Museum, 2301 Coliseum Parkway, Montgomery. Guests can meet these animals up close, learn about them in their habitats, and take home some special prizes.

Another night of fine music is coming to Capitol Oyster Bar on Sunday from 5 pm to 9 pm: Big Al and the Heavyweights play Cajun, Zydeco, blues, rock, and more. They call it a “musical gumbo.” If that’s not enough, Capitol Oyster Bar also has the Reba Russell Band featuring Jeff Jenson. The show starts at 5 p.m. at 517 Shady St., Montgomery. Admission is $20 to get into both shows. If you come in after intermission, it’s $15. capitoloysterbar.com.

Sundays in the Park in Montgomery

It’s three concerts in one — and all are free — when Montgomery hosts Sundays in the Park this weekend. Take your pick from Ida Bell Young Park, 5400 Vaughn Road; Peter Crump Park, 3510 Woodley Road; ED Nixon Park, 1000 Edgar D Nixon Ave. The music is from 4 pm to 6 pm Along with the music, there’s food and fun. This won’t be the last of this kind of series. Montgomery plans to host music at other parks — one in each of the city’s districts — by the end of the summer. For more information, contact Sydnei Jarman at [email protected]