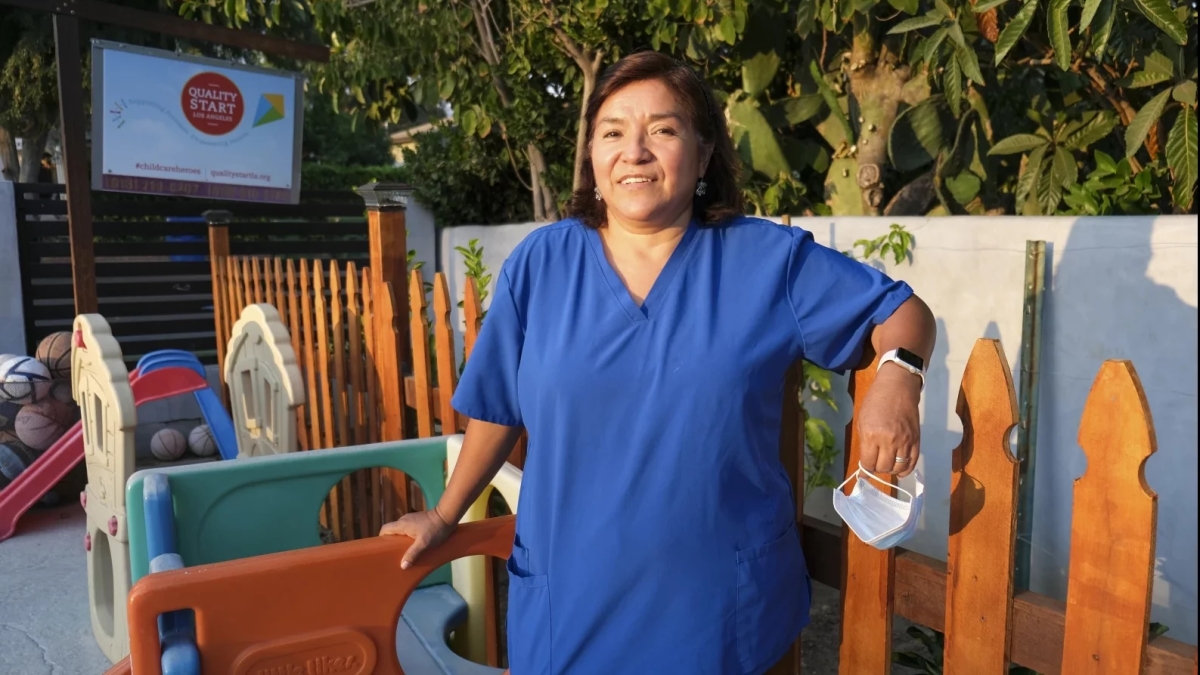 The training has traditionally concentrated on male-dominated professions in professions such as construction, electronics and plumbing, in areas with above-average wages. But a handful of states are now certifying early childhood apprenticeships, including California.

“We have a program in place to meet the needs of first-generation college students and working mothers,” said Wolfe.

More than 350 people completed their training as educators between 2016 and 2019, including the family educator Carmen Del Alamo.

She was a nurse in Peru before moving to Los Angeles and opening her children’s home more than 10 years ago. Del Alamo said she wanted to return to college early, but the day classes didn’t fit her schedule and she couldn’t really afford them.

A quick tour of her home showed how she puts her child development training into action. There are areas for science, math, and music and another one where toddlers can practice fine motor skills, like zipping zippers, buttoning buttons, and fastening latches.

Del Alamo said that the children’s emotions are at the heart of their program. A crying child justifies more than “Shhhh” or “Please be quiet”.

“You are crying for something,” said Del Alamo. “You have to acknowledge their feelings. It is really important.”

Del Alamo earned her teaching diploma in 2019 and is aiming to get a bachelor’s degree and one day open a standalone daycare center.

“I [am] really, as they say grateful – grateful, ”said Del Alamo.

There are now four different early childhood apprenticeships, with around a dozen cohorts spread across California, and more are in preparation.

But the pay is persistently low, even for well-trained early childhood educators. The average hourly wage for childcare workers nationwide is $ 11.65. According to the University of California, Berkeley’s Center for the Study of Child Care Employment, preschool teachers make about $ 14.67.

“In many areas, you can expect significantly higher wages as you hit key milestones such as degrees,” said the centre’s research director, Abby Copeman Petig. “That is not always the case with early childhood education.”

Wolfe said California’s childcare education programs are largely backed by philanthropy, with some public funding. She advises donors that the lack of educators has an after-effect.

Research shows that childcare employment nationwide is still 10% lower than before the pandemic.

One of the newest apprenticeship programs in California aims to expand the workforce by adding high school juniors to college courses and placing them in summer childcare jobs. The ultimate goal is an associate degree, a certificate of child development, and paid on-the-job education.

Cara Sklar, deputy director of early education policy at the New America think tank, has evaluated the beginnings of youth education in Oakland, California before the pandemic and found promising but also potential pitfalls.

And apprenticeship alone cannot raise wages in this area, she said.

“Families can no longer pay, and then the providers can no longer pay their teachers,” said Sklar. “Until new federal, state and local funds arrive, until new public funds come in, we’re stuck with a small amount of compensation. But we don’t have to. “