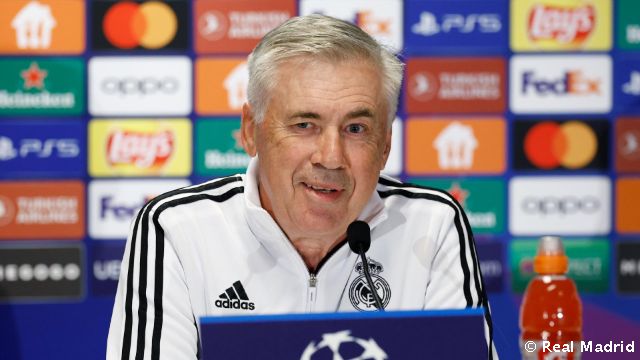 “It’s perfectly normal that you have to dig in in football and all the games are more evenly contested nowadays,” added the coach.

Carlo Ancelotti addressed the media at the Legia Warszawa on the eve of the Champions League group stage Matchday 4 encounter between real Madrid and Shakhtar Donetsk (9pm CET). The coach previewed the match in the following terms: “We’ll have to take a look at the players who played and assess whether they’re tired. Tonight’s training session will be very important in terms of choosing the right line-up to win the game. We’ll be looking to put the group stage to bed tomorrow night.”

“It takes an awful lot for the players to become angry and everyone expresses that in their own way. The reaction from every member of the group has been very positive and they don’t really get down when they don’t play, but that’s to be expected. Nobody has thrown in the towel up until now. They’re very respectful when it comes to my decisions and that’s the most important thing. I always say that they have to respect the individual”.

Vini Jr & Benzema
I’ll have to take a look at wine because he has played every game and then had the traveling on top of that. Benzema is doing fine and will play tomorrow night because he had a rest, just like Kroos other mendy. If they’re fresh, they’ll play.

Courtois
“He was looking a lot better today and we spoke to him before we left Madrid. The plan is for him to start training again on Thursday so that he is fit for Sunday’s match.”

lunin
“I speak to him and tell him he’s doing well, he’s young and possesses real quality. These kinds of games are useful because they allow him to gain experience and knowledge, which is the only thing he is lacking.”

Hazard
“He might play or he might not, which is always the case. I’m not totally clear on my line-up at this point in time. The players who haven’t been playing will play tomorrow night. As for the rest of them, I’ll assess things with my coaching staff and the medical team.”

Winning after being made to suffer
“I didn’t watch the Barcelona game. The motivational side of things is key in football. When you win games you don’t deserve to that’s also down to your character and personality. It’s perfectly normal that you have to dig in in football and all of the games are more evenly contested nowadays. All of the teams are well organized and you have to work hard to score. It’s difficult to make the breakthrough in the modern game.”