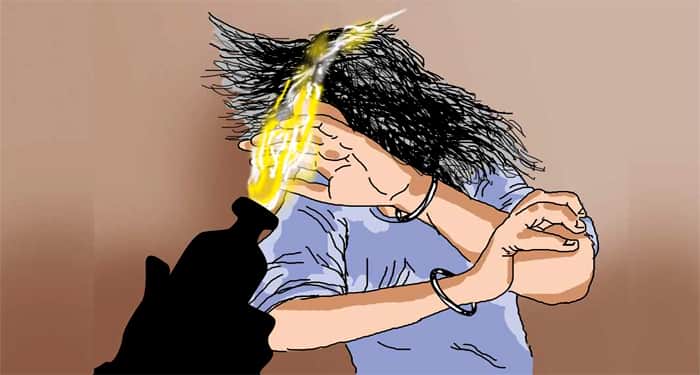 Srinagar: Every eye became moist when a 24-year-old girl groaned with pain. A frail father and an ailing mother were trying hard to come to terms as their daughter with her face disfigured lie on the hospital bed.

“An unforeseen tragedy has broken our back,” cried the uncle of a 24-year-old acid victim.

Coming from a poor family, the girl worked in a beauty parlor at Nowhatta to support her father, who is a tailor. It was around 6 pm on Tuesday when suddenly her world turned upside down. She was on the way home when the accused threw acid on her.

“She is the second eldest among three sisters. Her mother suffers from multiple health ailments and remains mostly bed-ridden. My niece was doing her best to financially support the family and help her poor father. However, everything feels hollow and the trauma is unfathomable,” her uncle said.

Another family member said the perpetrators should be severely punished so that such incidents don’t occur in the future.

“We want justice and the harshest of the punishments for the assailants. This way, other girls will feel safe in the future. Besides, we need monetary help from the government as we can’t afford the expenses for the girl’s treatment,” the member said.

The girl was undergoing treatment at the operation theater in the Ophthalmology ward at SMHS Hospital, Srinagar when the story was being filed.

“Her eyes and face are partially damaged,” a staffer at the hospital said, wishing not to be named.

Acid attack is a form of gender-based violence against women whereby a person throws a corrosive acid, usually on her face, in order to cause grievous hurt and disrupt her socio-economic life.

This is usually done to avenge rejection towards sexual advances, affair proposals, etc., in case of domestic violence it is administered by husband or in-laws on demand of dowry, or to showcase their superiority. The National Crimes Record Bureau in 2018 released a report that stated 228 cases of acid attacks were recognized in India. However, the real number of cases is likely to have exceeded 1000 but were unreported due to fear.

The incident has triggered a sharp reaction from the netizens on K-Twitter who were unanimous in condemning the incident and seeking punishment for the accused.

Subreen Malik, a lawyer, wrote in her Facebook post. “There is a deep rot in the society which needs a non-judgmental collective response. This is what happens when gender-based violence of any form is normalized,” Malik said.

Similarly, journalist Tooba Towfiq said those looking for reasons behind the acid attack on the 24-year-old before condemning it might want to introspect because they enable such crimes against women. “Absolutely deplorable. Stringent action must be taken,” she wrote on Twitter.

Meanwhile, a stalker, who was spurned by the acid attack victim, has turned out to be the mastermind of the gruesome incident in Srinagar.

Police have arrested the stalker and his two accomplices. Police have sealed the shop that sold the acid in violation of the Supreme Court guidelines.

Police said they received information regarding an acid attack on a 24-year-old girl in the Hawal area on Tuesday evening. A case under section 326-A of IPC was registered in Police Station Nowhatta and an investigation started.

“During the initial investigations and technical analysis, the name of one suspect came up. It led to the arrest of the main accused Sajid Altaf Rather. During his initial questioning, it came out that the accused was having an interest in the girl and since she had rejected his engagement proposal, he had been stalking her. The accused had done recce before this attack. The accused used to work in a medical shop and on Tuesday evening, he took a break. He along with a co-accused Momin Nazir Sheikh went to the area where the girl used to work,” a police spokesman said.

They chased the girl and threw acid on her before fleeing the spot. Later he went to the shop to hoodwink the law enforcing agencies.

“The second accused was also arrested. The scooty used in the commission of the crime was also seized. It further came out that the accused had purchased acid from Mohd Saleem, a motor mechanic who works at international motors near Dalgate. This third suspected person has also been arrested,” he said.