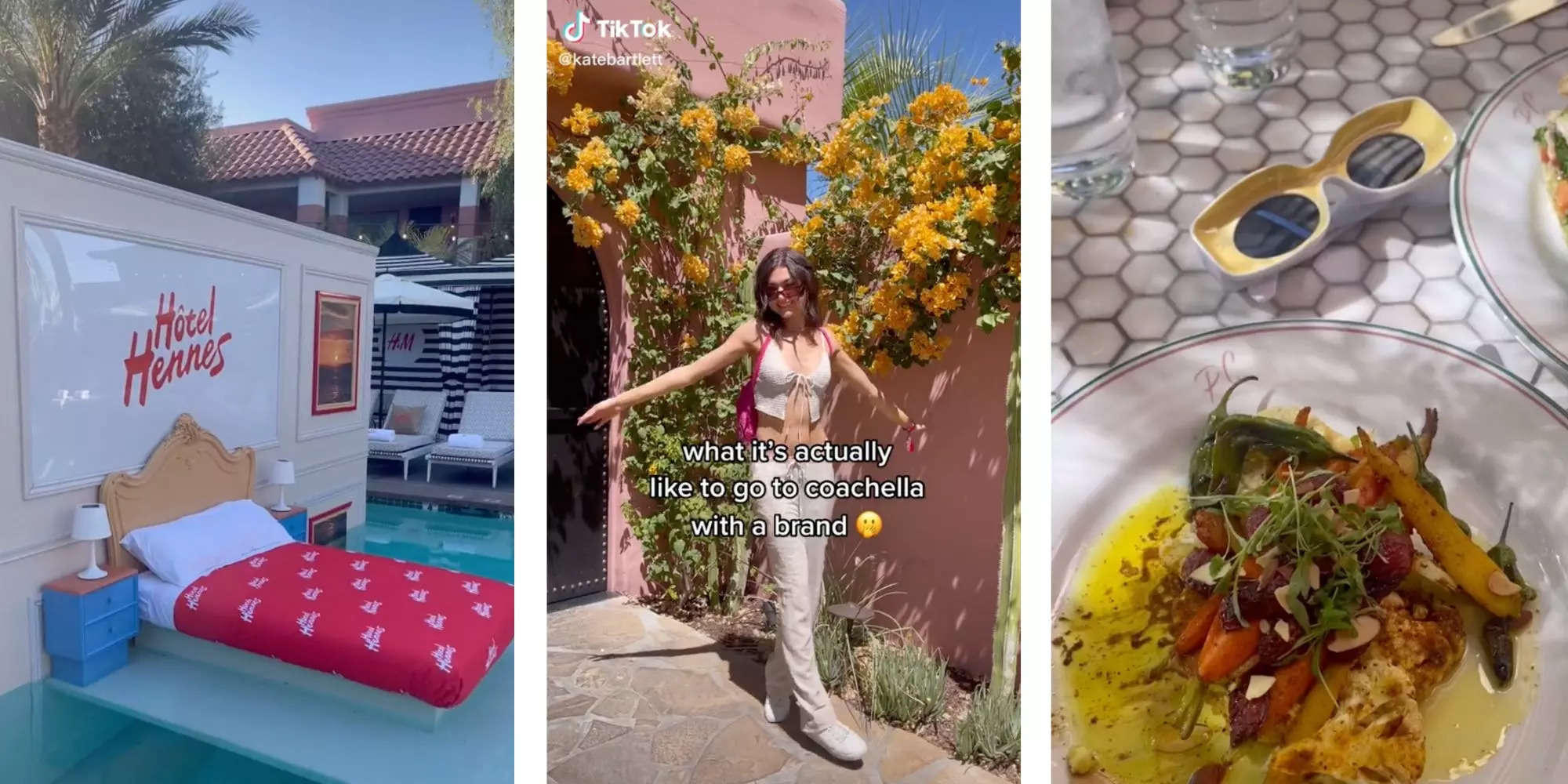 Kate Bartlett, a student and influencer based in New York with 1.2 million followers, has been going viral for sharing behind-the-scenes footage of her trip to the Coachella music festival, which she said was sponsored by clothing brand H&M.

On April 18, Bartlett posted a TikTok with an on-screen caption that read, “What it’s actually like to go to Coachella with a brand.”

@katebartlett what it’s ACTUALLY like to go to Coachella with a brand! thanks @hm.official and Hotel Hennes for making my festival weekend so fun ♥️ #HMxMe #partner #coachella #coachella2022 ♬ First Class – Jack Harlow

In the video, Bartlett said her trip was sponsored by the fashion retailer H&M, which temporarily “took over” a called Sands Hotel & Spa in Indian Wells, California, to house influencers during the festival, according to Paper Magazine.

Bartlett shared footage of decorations outside the hotel, saying, “They love to make the hotel super cute so you take lots of photos. They literally put a bed in the middle of the pool.”

The influencer also shared footage of merchandise that was left in her room, including a hat and two water bottles that said “Hotel Hennes,” on them, which is the name of H&M’s temporary hotel, according to Paper.

Bartlett also filmed a cart stocked with candy and snacks at the festival, which she said the brand provided so she could have “everything you need during the day.” She then said she was given a “full-service glam team” who did her hair and make-up every morning.

According to Bartlett, the brand provided her with a “full-service bar” and “phenomenal” meals at the Hotel Hennes restaurant, where she said the menu was different every day during her visit.

She was also driven to the festival in a “party” van which had dark blue mood lighting and music.

Overall, Bartlett said, “It was literally so fun. I had the most amazing time. Thank you H&M.”

Most commenters under the video seemed envious of Bartlett’s luxurious trip. One comment with 5,000 likes said, “Would absolutely die to live this kinda life.” Another comment with 190 likes said, “Not me watching this after coming home from my shift at H&M it’s a sad life.”

Bartlett posted eight other TikToks documenting her experience at Coachella, which have a combined total of 9.3 million views. In the videos, she shared the outfits she wore each day, as well as short clips from the performances she attended.

She also posted a series of Instagram posts about her trip, including one marked as a paid partnership with Sands Hotel & Spa, in which she also tagged H&M, thanking them for the trip.

Bartlett has been posting on TikTok since March 2020, and she typically uploads lifestyle content explaining what she does every day while living in New York and studying as a fashion student. Her videos usually get hundreds of thousands of views each.

Coachella is an annual music festival often attended by influencers and celebrities in California. It took place this year for the first time since 2019, after which it was canceled due to COVID-19 pandemic restrictions.

For more stories like this, check out coverage from Insider’s Digital Culture team here.