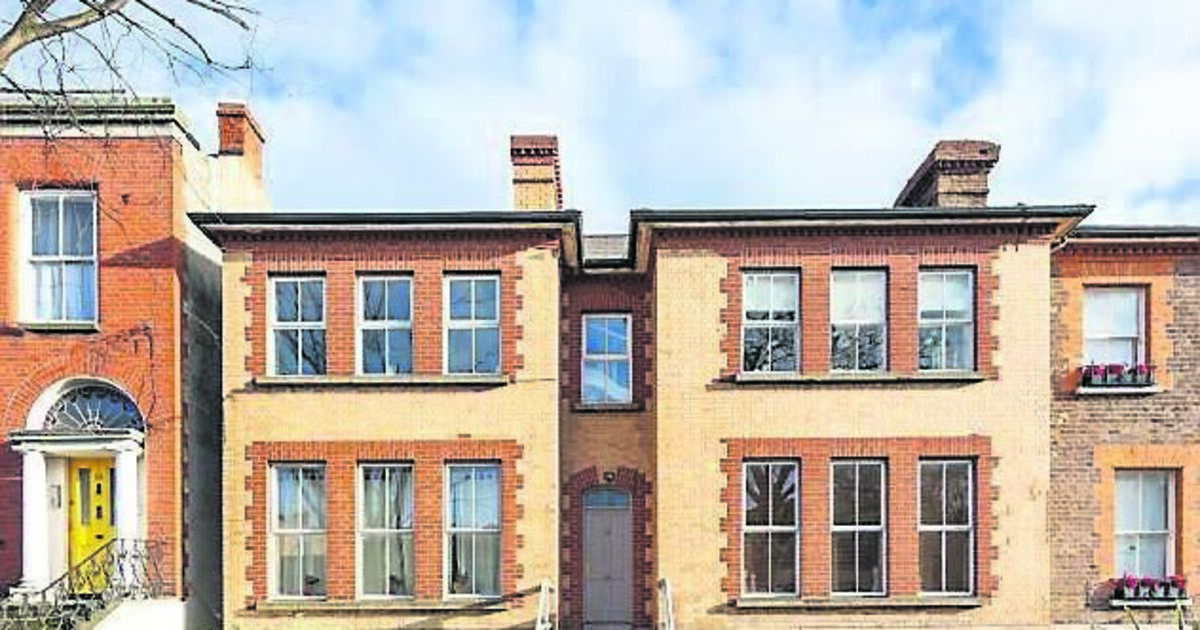 It would take just 20 minutes to walk to Stephen’s Green in Dublin city center from Apartment 8, Bellisle House in Ranelagh.

“The location is a huge selling point — it’s close to amenities in Ranelagh and Rathmines, while Baggot St, Grafton St, Temple Bar, the National Concert Hall, Iveagh Gardens, and Trinity College are all within strolling distance,” says Patricia Casey of Quillsen auctioneers.

A little bit different from the average modern apartment, it’s located on the first floor of a 1970s-built apartment building designed to resemble a three-storey redbrick period house.

As a result, it has been built with a double-height ceiling in the living room and, according to Ms Casey, this gives a sense of space to the property, which has 570sq ft of accommodation on its lower level and an additional 215sq ft in a mezzanine level/attic.

The lower level has an open-plan living area with a kitchen on one side and a bright, high-ceilinged sitting room on the other, which is quirkily and colorfully decorated.

An open tread modern staircase leads up to the mezzanine area, which has a galleried area/study and a floored attic (used as a bedroom) with en suite.

At the lower level, the apartment also has two bedrooms and a bathroom.

Although the low E BER rating needs attention and space is limited, Ms Casey says the location is excellent.

The design of No 3 The Lake District, Aghadoe in Killarney is stylish and contemporary and the views of the Gap of Dunloe and the McGillycuddy Reeks that it will offer from its second-floor balcony promise to be wonderfully scenic.

Construction is now underway on the three-storey townhouse, which is part of a small gated development of five architecturally-designed rectangular properties and is set to be completed by the summer.

Sherry FitzGerald Coghlan and Property Partners Gallivan are joint selling agents for the three-bed house which is being built to an A2 BER standard and will have 1,550 sq ft of living space.

The layout includes a lounge, a kitchen diner, a utility room and a guest WC at ground level, and two bedrooms and a bathroom on the first floor. The upper floor is to have an en suite bedroom and a second living room, both have a fully glazed wall.

The most striking and stylish feature will almost certainly be the large integral glass balustraded balcony designed to provide a sheltered space in which to sit and enjoy the views.

Located close to Fossa village, The Lake District development is 5km from Killarney.

Given the stylish design, the A2 rating, the mountain views as well as the popularity of Killarney properties, auctioneer Michael Coghlan expects it to attract retirees, holidaymakers and as well as buyers who want to move to Kerry and work from home.

THE full country living experience is on offer at Stone Lodge, 11 Deerpark in Bunratty — a four-bed bungalow with over half an acre of gardens, a polytunnel, and almost every type of fruit that you might think of growing in Ireland.

The owners have been creative with the 1970s bungalow they bought in 2005 and have extended and opened up the space in the center to create a huge open-plan kitchen/living/dining area that features a vaulted ceiling, exposed beams, and Velux windows.

This has been fitted with a traditional-style kitchen with carved pine units and granite worktops.

Now offering 1,865sq ft of living space, the property has three bedrooms and a bathroom on one side of the central living space and a guest wing with bedroom and bathroom on the other.

In the gardens, there’s a detached garage/workshop, an octagonal gazebo, and a fruit growing area.

“The owners grow strawberries in the polytunnel, have also planted apple and pear trees as well as blackcurrant and redcurrant bushes. It’s a perfect summer oasis,” says Sean McGee of Sherry FitzGerald Limerick.

Quoting a guide price of €425,000, he says that this is an attractive family home in an idyllic rural setting situated within easy commuting distance from Limerick City.

Located within a few minutes’ drive from Bunratty village, Deerpark is 10km from Shannon Airport and 20km from Limerick City centre.

VERDICT: Offers space, privacy, and some fruit to stay healthy.

LIFE near the Waterford coast could be comfortable as well as energy-efficient in this modern four-bed detached property at 143 Cluain Larach, Knockenduff in Tramore.

Auctioneer Michael Griffin says it was superbly built by SE Construction, has high-quality fittings, and has been stylishly decorated and beautifully maintained by its owners.

“Because there is a shortage of all kinds of properties in the area, especially of ones for families trading up, we expect this to attract a lot of interest from both local and relocating buyers,” he says, adding that recent buyers in Tramore have come from the Dublin commuter belt, Cork City and abroad.

“We are getting buyers returning from the Middle East, Australia, and Canada, and many of them are looking for a property with space to work from home,” he adds.

The accommodation at 143 Cluain Larach includes a home office, as well as a sunroom, utility room, lounge and guest WC. To the rear there’s a spacious modern kitchen/diner with contemporary gray units. Upstairs there’s a bathroom and four bedrooms including one en suite.

VERDICT: Has all the space and comfort a trading up or relocating buyer could ask for.