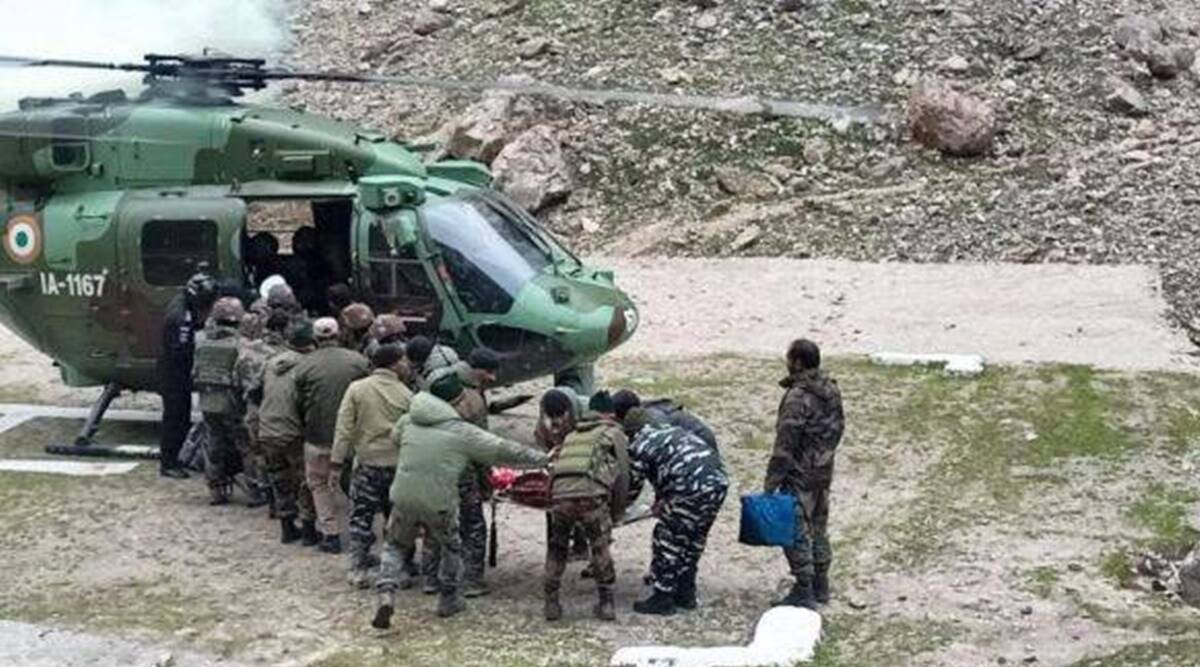 No lives were lost in last year’s July 28 flood — there was no yatra in 2021 owing to the Covid-19 pandemic. The flash flood, which was caused by heavy rain, had triggered shooting stones, and the flood waters reportedly washed away a couple of tents set up by security personnel in the area, but no one was hurt.

Yet, as The Indian Express has reported, this year, the tents for pilgrims were set up on the flood channel, also known as the dry river bed. This was done to accommodate as many people as possible at a time. A langar was also permitted to operate from this dry river bed.

“It was well known that the water channel there is prone to flooding, but still the planning completely lacked any thoughtfulness, especially about the weather at this time of the year. The main effort was to show numbers,” said an official in the state familiar with the matter.

Sonam Lotus, Director of the J&K meteorological centre, told The Indian Express he could not say how much it rained in Amarnath on July 28 last year, as there was no yatra and therefore, no measuring instruments had been installed in the area.

A statement from Raj Bhavan after last year’s flood said, “A joint team of Shri Amarnathji Shrine Board, Police and Army, acting swiftly, evacuated all the staff present close to the Nallah. No loss of human lives or property is reported… As per the latest report, the Holy Cave shrine is safe. Hon’ble Home Minister Shri Amit Shah also spoke to Lieutenant Governor, Manoj Sinha, who briefed him about the present situation and efforts made by the joint team of officials, Police and Army.”

Sources familiar with the yatra arrangements said that prior to this, in 2019 and earlier, the practice was to put up tents well beyond the flood channel of the stream.

An official source said last year’s flash flood as well as the one in 2015 had been discussed at all official meetings and on the basis of expected water levels, it was decided to take precautionary measures such as building the embankment. But the water that suddenly gushed into the stream last Friday was beyond all calculations, said the source.

This year’s Amarnath yatra, billed as the biggest-ever, was the first after 2019, when the pilgrimage was interrupted for the government’s August 5 revocation of special status to J&K and the bifurcation of the state into two Union Territories. Several Hindu organizations across the country had mobilized huge numbers of pilgrims for this year’s pilgrimage.

In April, Union Information and Broadcasting Secretary Apurva Chandra said the yatra would have around six-eight lakh pilgrims. Official sources told The Indian Express that between June 30, when the yatra began, until Friday, 1.13 lakh pilgrims had visited the shrine in the Amarnath cave.

It was also the first time that the government decided to track all pilgrims through Radio Frequency Identification, a wireless tracking system that consists of tags and readers. Radio waves are used to communicate information/identity of objects or people to nearby readers – devices that can be hand-held or built into fixed positions like poles or buildings. Every yatri has been given a tag.

This measure was introduced in view of the potential security threat to pilgrims from militants, who have of late targeted members of the Pandit community and other Hindus in the Valley. After the disaster on Friday, the several missing people should have potentially been traced through their RFID tags.

Rohit Singh Sambiyal, who heads the Jammu-based service provider G Max IT Services, said so far 1,82,110 pilgrims had been tagged. He said a total of seven readers, with two antennae each, had been set up along the route.

Sambiyal said he had been providing the victims’ “last known location” to the security forces, administration and rescue teams. Asked why the missing people could not be located through their tags, Sambiyal said these were “passive” RFID tags that sent locations only within the range of the antennas.

An official familiar with the RFID system for the Amarnath pilgrims said the number of readers provided was inadequate, and there was no clarity of purpose to the entire project, and the issue had been discussed at several meetings.

Another official source said the RFID tag had proved “very useful” on the day of the disaster in ascertaining how many people had crossed into the area closest to the cave. But, the source said, at many places along the route, the pilgrims were seen taking off the tag while resting, and that this could be one reason why the missing could not be tracked through RFID signals.

Calls to Nitishwar Kumar, SASB CEO and Principal Secretary to LG Sinha, went unanswered. He did not respond to questions texted to him. The L-G’s media adviser, Yatish Yadav, said he was not authorized to speak on the matter.