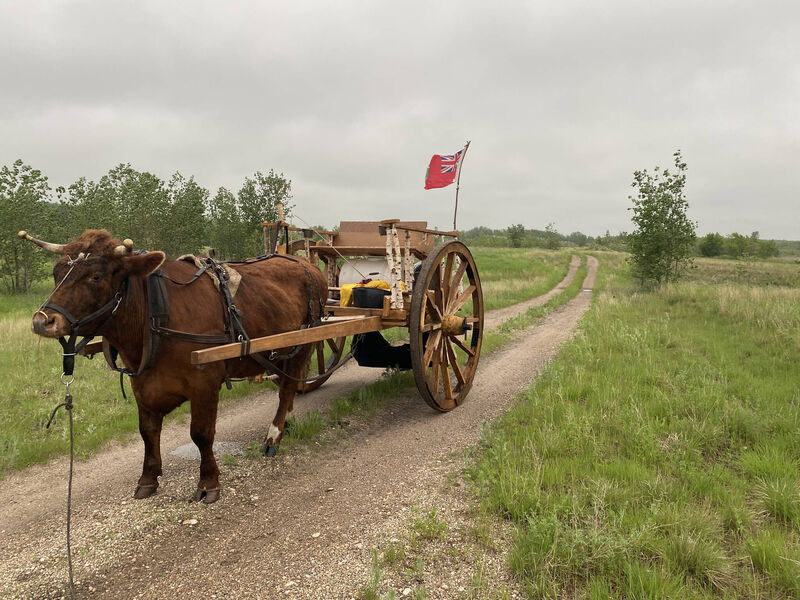 Several nights ago we camped beside the town of Lake Agassiz, Minn. At least that’s what I read on the map. I didn’t blink and I still missed it. Not much of a monument to the largest lake the world has ever known. Lake Agassiz was almost four times the size of Lake Superior, the current title holder in the category. Its depth over Winnipeg would have almost covered two Richardson Buildings stacked on one another.

Lake Agassiz did leave a pretty valuable legacy for us Red River cart drivers. Long before it was given a name, those traveling on the trail recognized that a giant sea had shaped the geography they were traveling over. As Agassiz receded in stages, it left behind its beaches: concentric highway-shaped ridges that were perfect for, well, highways. High and dry out of the mud and swamps. Traveling is just as delightful as ever for us modern day beach bums, with the stillness and scenery of an ancient lake moving lazily by.

As bands of wanderers slowly followed receding Lake Agassiz north, they came across a brand new convergence of four rivers. An unseen guide had led them to a place of abundant fish and a transportation hub that would make this the perfect meeting place. The new arrivals couldn’t have known they had come to the very heart of their continent, Turtle Island. A heart with four river veins flowing in and one large life-giving Red artery flowing out. Later oral histories and prophecies confirm that this riverine hub has an important place in the Creator’s own heart.

Eight thousand years after the coming of those first citizens, I had come to call the city, built here where many paths meet, my home. I felt drawn to be part of the Creator’s ongoing expression of care for those dwelling in this place. I wanted to honor Him as those before I had done for millennia. In seeking to put feet to what was in my heart, I decided to walk round the city. Literally. While I walked I would ask the Creator to continue his life-giving work here. I would sing of his goodness and his love. I would declare his sovereignty over this place.

I started walking on the perimeter but that got pretty busy and loud pretty fast. So I started following the actual city boundaries — a logic-defying polygon in the rough shape of a cross. I’d drive to where I left off the time before, walk four or five kilometers, and then loop back to my car. The boundaries sometimes follow gravel roads, sometimes dirt roads, and sometimes cut across the middle of nowhere with nothing but a GPS to identify where city stops and country begins.

I wanted to tackle any obstacle I encountered. I scaled fences, waded through swamps, swam across the four rivers. I felt the presence and direction of that same unseen guide, and was having a lot of fun. So when my 30-stage lap around town was finished, I kept going. I skied the trails, snowshoed the creeks, biked the paths, canoed the hub of rivers. I was often joined by my wife, Patty, or others.

Somewhere along the way I found a metaphor in the Canadian Rangers. The Rangers are a quasi-military, mostly indigenous order of watchmen who patrol the wilder parts of this country. While hunting or traveling out on the land, they are the official representation of Canada as they go. Their presence declares the land to be sovereign territory. Thus they call their journeys ‘Sovereignty Patrols’ or just ‘Sov Pats.’ I saw that my wanderings about Winnipeg were doing the same thing as the Rangers, but on a spiritual level — proclaiming the Creator’s sovereignty over the land. And so my ventures came to be known as Sov Pats.

I often wished I could do the same thing on a bigger scale. Maybe five years ago, the dream of an ‘Epic Sov Pat’ started to take form. Every version of the dream involved my love of Manitoba history and started with an ox cart journey leaving the heart of Winnipeg and heading down the Red River Trail. But there were two unbending obstacles in my way. My knees. I could still walk. Painfully. But to haul myself onto a cart repeatedly, and survive the rigors of eight long weeks on the trail? No way. So my dream would remain a dream.

Cyborgs on the Red River Trail

I was maybe 12 years old when I wrapped my knee around a lift pole on a ski slope — the first of a number of graceful events that left me wincing when I walked. By the time of that glorious wipeout, Dr. Frank Gunston, from Flin Flon, had wrapped his brain around the solution to my problem: he had charted a path through the complex array of impossibilities for total knee replacements.

I had tried a number of things to deal with my pain, but I didn’t have a lot of hope when I asked my doctor if I’d qualify for new knees. “Why not?” what her answer. Those two words made my heart leap — partially at the thought of pain-free walking, but more so with the rush that an Epic Sov Pat could actually become a thing. After a few false starts with COVID cancellations, I got my shiny titanium implants. (Thanks to all of you for picking up the tab.) So, easy carting for 500 miles to St. Paul, right?

It turns out that someone else needs some metal body parts to keep those big wheels rolling. It’s Zik’s turn to wait in line for his prostheses. Before we left on our journey, Dr. Bovine (Manitoba’s Dr. Gunston of ox hoofs) tried to solve a problem the Métis cart drivers to St. Paul didn’t have to worry about — hoofs wearing down over long distances on hard surfaces. He put a thick epoxy coating under each of Zik’s eight claws. Good idea, but it was pretty much worn off by the time we were out of Winnipeg.

We continued on Zik’s natural hoofs as we crossed into the United States but they were wearing down way too fast. We needed help, and it came in the form of John Nyegaard, a farrier in northern Minnesota. His solution involved repurposing his wife’s Pampered Chef cutting board into eight claw-shaped pads. Another good idea that outlasted the epoxy by a day. (But thanks for the sacrifice, Janelle.)

We’ve got one more old-fashioned idea. I’ve learned there’s still one blacksmith in North America who makes a living out of forging ox shoes. Nick Brown understandingly moved us to the front of his queue of ox-loving customers and then overnighted those shiny steel enhancements from Nova Scotia to an impatient Zik. With our bionic upgrades, us two cyborgs will finally be heading back to the beach.

Agassiz Trailers are made in Winkler on the bottom of their eponymous lake. The company’s claim to quality states that their “trailer designs are built to withstand the drastic and sometimes extreme Canadian climates.” Sounds like a worthy successor to the original Manitoba-designed trailer. The kind being pulled by our ox. The Red River cart had some high-tech features, such as a tapered axle and matching hub core that would allow the cart to move in ‘drastically’ wet weather. If the axle ends had been straight, any swelling with moisture would cause the wheels to seize and then nothing would be able to turn them.