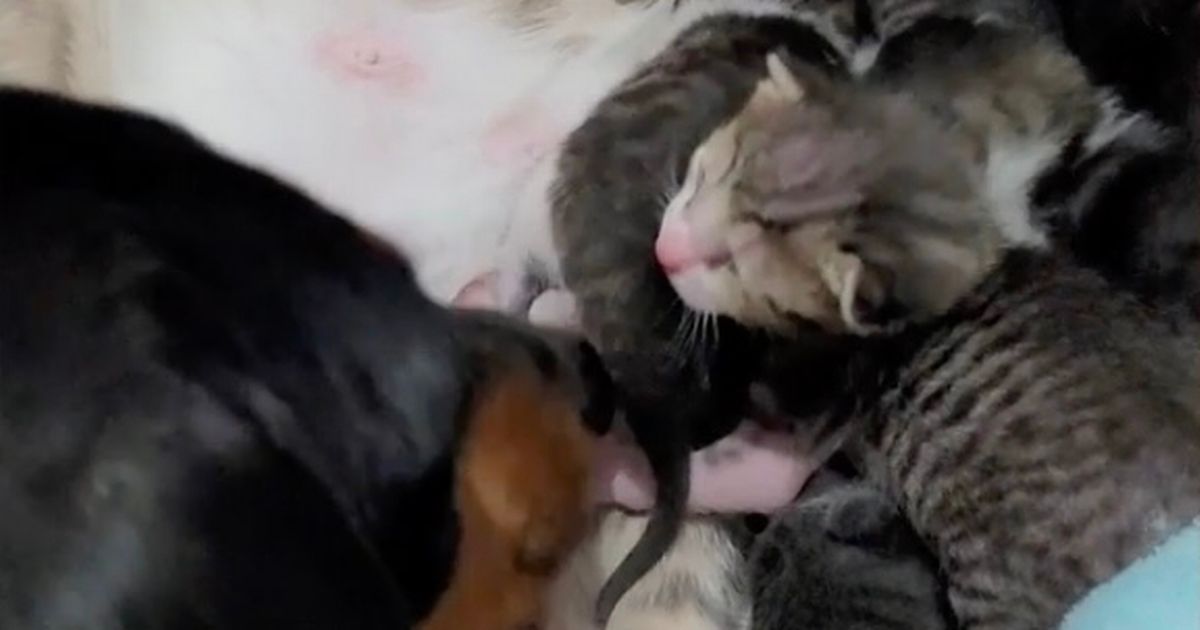 Balu the dachshund has been helping his owner Julieta Gonzalez Laplac, 27, from Argentina, cares for a litter of seven kittens, and takes it upon himself to tuck each one into bed at night – not forgetting a sweet kiss

Adorable dog tucks into new litter of kittens into bed

Being tucked into bed at night is a luxury you only get as a child, and one you should really treasure.

These tiny kittens are making the most of it, after Balu the dachshund took it upon himself to help do the night shift.

One-year-old Baloo may be young but he’s proving that he’s already got a paternal instinct.

In the video, the sausage dog can been lovingly cleaned and ‘kissing’ each kitten before tugging on the blanket and wrapping it around them.

Baloo cleans and tucks in every kitten
(

He makes sure everyone is warm
(

Sign up to our TeamDogs newsletter for your weekly dose of dog news, pictures and stories.

His affectionate nature even took Julieta by surprise, who hadn’t seen him express this caring behavior before.

Since sharing the clip on her TikTok page, other dog lovers have been amazed by Balu too.

Julieta said: “The cat is lying down with her babies and Balu covers them with a blanket so they don’t get cold. They began to get closer since the kittens were born.

“At first we didn’t allow him much access because we were afraid he would hurt the kittens, but when we realized that his reaction was loving we let him spend time with them.

“We know the dog won’t harm the cats and we let them spend time together.

“The truth is, the dog’s behavior surprised us. We received many beautiful messages and we’re very grateful.”

The sausage dog is only a puppy himself
(

His affectionate nature has stolen hearts
(

Another dog who is taking people by surprise this week is Barli the Barnese mountain dog.

Barli weighs an incredible 8st 1lb, which is double the average size of a dog his breed and age.

The ever-growing canine eats around four cups of food a day, equaling 10lbs of food in 24 hours.

Owner Nicole Coghlan, 27, from Illinois, US, loves to show off her gigantic puppy on social media – though lifting him up to the camera gets harder as each day passes.

Do you have a dog story to sell? Email [email protected]