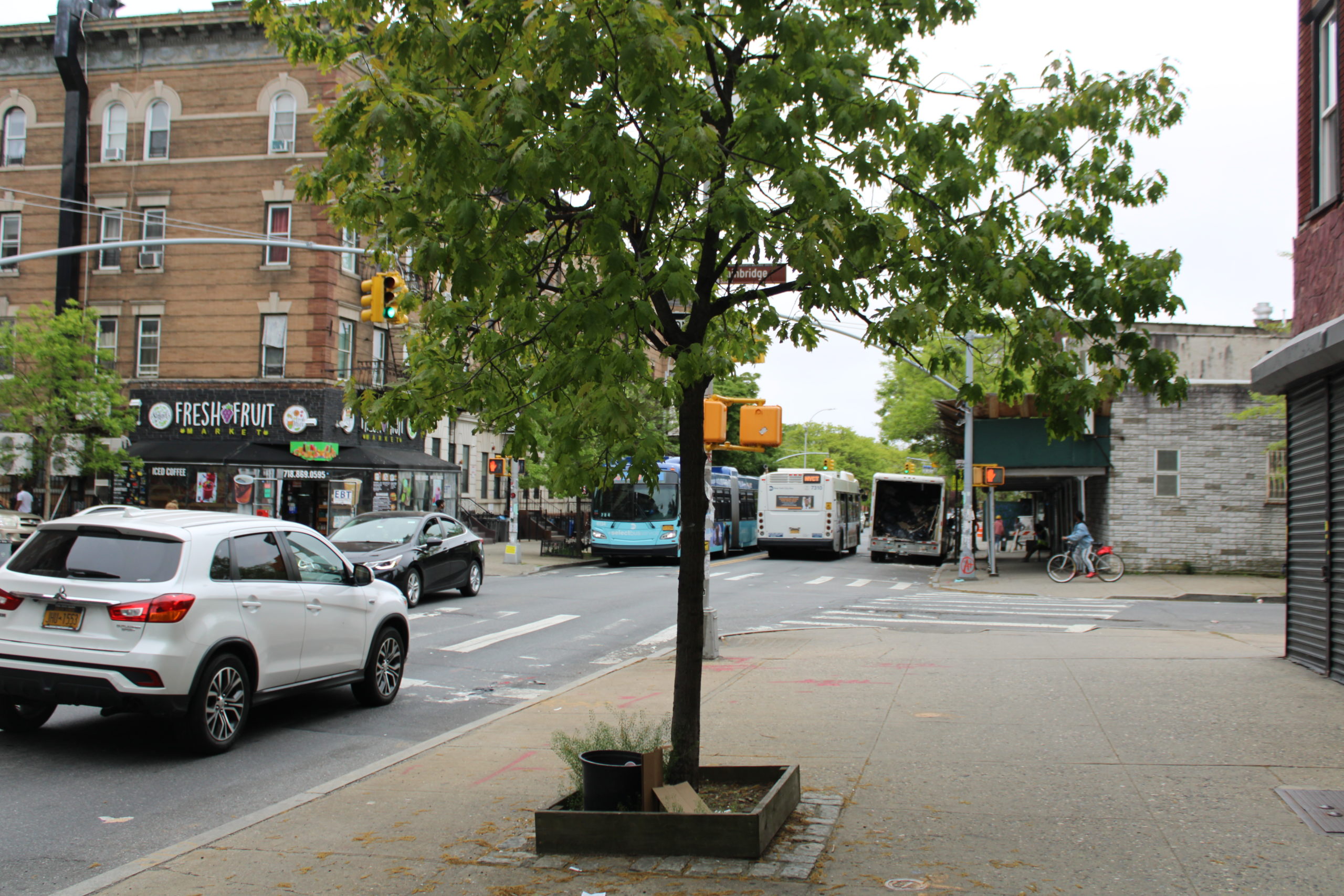 A group of Bed-Stuy community members and non-profit organizations are joining forces to create a greener neighborhood and help uplift the youth in their area.

Focusing on the section of Malcolm X Boulevard near Jackie Robinson Park, the fundraiser is seeking $15,000 to go toward hiring landscaping company LIVIN NYC to beautify the area, and providing local youth with training on how to care for plants, as well as providing them with grants for their work.

“Currently a landscape of empty storefronts, garbage strewn sidewalks and limited vegetation, we hope to transform our section of Malcolm X Boulevard into a place we all want to be and take pride in, while helping our local youth build valuable job skills and experience. ” Reads the fundraiser.

Stefanie Siegel, the founder of Bailey’s Café, a nonprofit organization centered around arts education, community building and wellness, is at the forefront of the fundraiser.

Siegel acknowledges that all of a community’s issues cannot be solved with $15,000 but is still confident the group can make a difference. “If changing people’s attitude about being in the neighborhood and feeling it’s a place that they can take pride in and actually have an impact in, I mean, that’s huge,” says Siegel.

“We’re hoping to at least plant some seeds for that.”

The group has been working together since the summer of 2020, when they saw a surge of gun violence hit their community. They hope that through beautification and community engagement, they can help create an environment that staves off violence.

“We want to do more than just beautification,” says Wesley Flamer-Binion, member of Friends of Jackie Robinson Park, one of the organizations involved. Flamer-Binion says a main objective of the fundraiser is to involve youth from the nearby Brevoort Houses in the initiative and pay them for their work toward beautifying the area.

They hope that through beautification and community engagement, they can help create an environment that staves off violence.

“The cops can come in and do what they do, but that wasn’t our focus.” Says Flamer Binion. “Our focus was like, how do we, you know, try to make some lasting impact that’s positive for young people in the neighborhood and bring more resources to the area.”‘

Last year, the group raised more than $11,000 to fund programs serving youth at Jackie Robinson Park. One of these programs was the BRO Experience, an organization led by “transformational educator” Barry Cooper, who teaches young men techniques like mindfulness and meditation to help combat gun violence.

HQ Tennis, a nonprofit that offers tennis lessons to kids in the area at Jackie Robinson Park is also involved in the initiative. “I can’t just show up and just give my lessons, I feel connected to the community,” says Frances Ferdinand, Founder and head coach of HQ Tennis.

Ferdinand has seen some of the violence in the area and its impact on the community firsthand. “One year we were doing some programming in the park, and we saw these guys shoot out right across the street.” Says Ferdinand. “It’s a little like nerve racking for me to have young kids on the court and to see something like that.”

But how can beautification, tennis, and meditation really help to create a safer neighborhood? Ferdinand says all forms of community engagement work together for good. “It’s all the same thing,” says Ferdinand. “If we care about our space, then we’re not looking to violate it, maybe the violence will go down.”

City organizations are also in support of the project. Jose Disla, a Catalyst Ogranizer for Partnership for Parks, the public-private partnership between NYC Parks and City Parks Foundation, got involved with the fundraiser after meeting Flamer-Binion through his work at Jackie Robinson Park.

Disla says projects like this give young kids “a sense of ownership, so that when someone comes over here, to try to, you know, move in or take it over, you have a sense of pride,” says Disla.

“Hopefully this tricks down, and you see this everywhere.”

BK Reader is brought to you for free daily. Please consider supporting independent local news by making a donation here. Whether it is $1 or $100, no donation is too big or too small!