The condition in Ukraine is devastating. Amidst the war-prone zone, many brave-hearted soldiers have fallen. Moreover, every country in the world is showing their respect for Ukraine’s heroic spirit and determination. In honor of this bravery, New York’s Flatiron Plaza is adorned with a bed of sunflowers. Take a look at these beautiful flowers that are a sign of solidarity with Ukraine.

Sunday 1/22 is the Ukraine day of Unity, “a day of reflection, resistance and hope for a free tomorrow,” recognized by this small installation across from @MadSqParkNYC. #UnifyUkraine pic.twitter.com/nx3J2noP0m

There is a sunflower bed set up on 23rd street at Flatiron Plaza in New York. Right between Broadway and Fifth Avenue, these sunflowers are a symbol of support and solidarity for Ukraine and its citizens. Moreover, this humble gesture was carried out on the 22nd of January, the Day Of Unity for Ukraine. And this beautiful bed of the country’s national flower is a representation of peace, happiness and hope. Interestingly, the number of sunflowers adorned at the plaza is exactly 333, which is the number of days that Ukraine is at war with Russia.

Standing In Solidarity With Ukraine 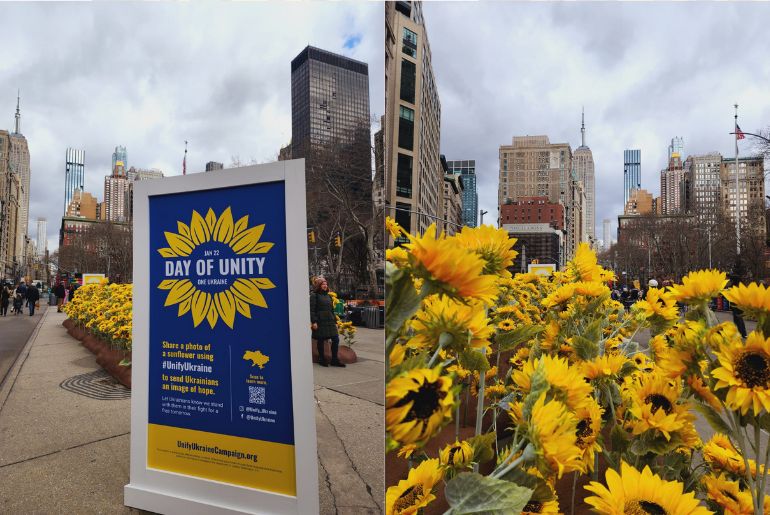 People are encouraged to click pictures and post them on social media to spread awareness about the horrifying time that Ukraine is going through. Also, people who couldn’t come in person are requested to share the clicked photos and post them on social media with the hashtag UnifyUkraine’. New York has always shown its support for the war-prone nation. Earlier, the Empire State Building was lit up with Ukraine’s national flag, while the New York Public Library released books about the nation’s history.

Also Read: McDonald’s Is Planning To Reopen Some Outlets In Ukraine

During this difficult time, people all over the world are praying for Ukraine and its citizens. This humble gesture from New York is welcomed by all.