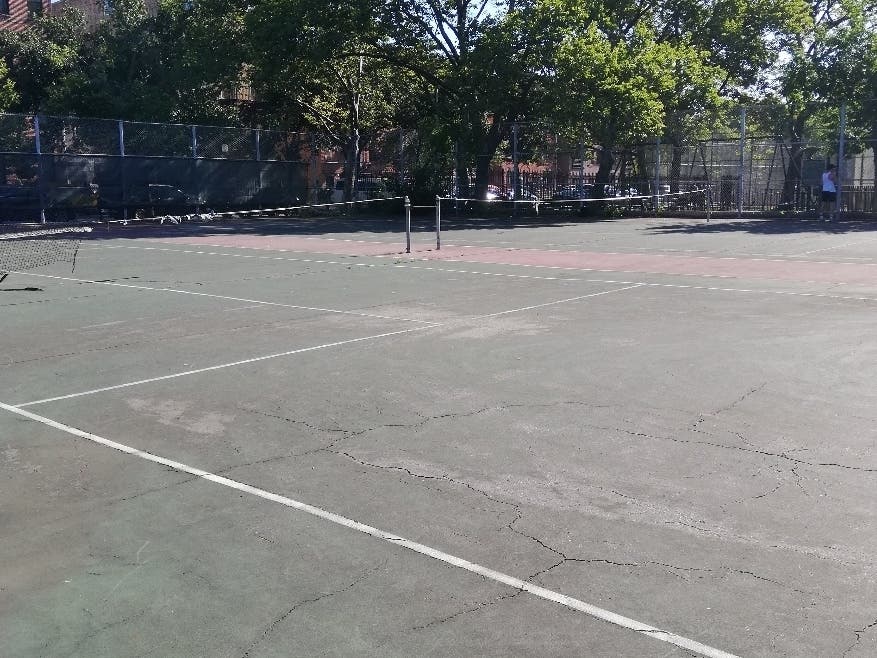 BED-STUY, BROOKLYN — A long-awaited upgrade coming to Bed-Stuy tennis courts will be a game-changer for a growing number of neighbors who play there — literally, according to local Coach Frances Ferdinand.

For years, cracks, sloping asphalt and a huge drain in the middle of the Jackie Robinson Park courts has forced players to be hyper-aware when learning the game, said Ferdinand, who runs HQ Tennis.

“If you go for the ball the wrong way, you’ll twist an ankle,” Ferdinand told Patch. “”There’s a slope, and this huge drain … We almost had a garden growing up from the cracks.”

The crumbling conditions has made it so many of Ferdinand’s coaching friends avoid using the Jackie Robinson courts when teaching in the borough, she said.

But that might change when a $530,000 renovation project starts this summer.

The Department of Environmental Protection is set to resurface the courts as they upgrade storm drains that run under the park to prevent flooding, the department confirmed to Patch. The resurfacing will be the first restoration of the courts in decades, according to Ferdinand.

The resurfacing will make it so stormwater that falls on the courts will be channeled to a natural drainage area instead of the sewers, preventing flooding by keeping 1.2 million gallons of stormwater out of the sewer system each year, a DEP spokespseron told Patch. It is one of 11,000 green infrastructure assets the department has put in place in the last several years.

For tennis players, the resurfacing will mean a smoother playing surface and, a special request from Ferdinand, change the courts from their faded green and red coloring to a vibrant purple and blue, which makes it easier to see the ball.

“We don’t have many purple courts [in Brooklyn],” said the coach, who requested the color change. “It will be something new, something fun.”

The resurfacing also comes at a critical time for the neighborhood.

Ferdinand and others have spent years working to transform Jackie Robinson Park into a safe haven amid escalating gun violence in the surrounding blocks. Most recently, neighbors have started raising money to beautify the Malcolm X Boulevard block neighboring the park.

Ferdinand hopes the court resurfacing is the start of more to come.

“The whole park itself needs to be renovated,” she said, noting cracks in the playground, warped basketball courts and other issues. “With all the people that use the park, you would think there would be a little bit more money put down.”

The Parks Department told Patch there currently are no other projects on the docket for Jackie Robinson. Ferdinand, along with neighbors, said they will keep looking for funding opportunities.

And even though the new courts might bring outside players to Jackie Robinson, Ferdinand said she’s committed to making sure all of the park’s neighbors come first.

“The hope is for the community who’s already using it to be proud of the courts,” Ferdinand said. “We’re really invested in the neighborhood … and to see that everybody feels welcome.”