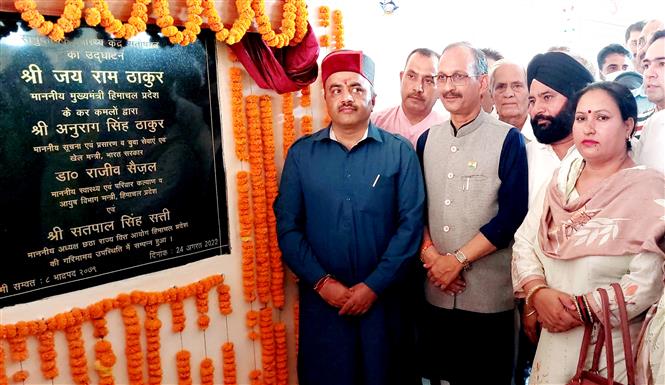 Health Minister Rajiv Saizal today inaugurated a new 30-bed health facility built at a cost of Rs 4.52 crore at the community health center at Santoshgarh in the Una Assembly segment. The Chairman of the State Finance Commission, Satpal Singh Satti, was also present on the occasion.

Saizal said that unprecedented development had taken place in the health sector in the past four and a half years in the state. He added that AIIMS, Bilaspur, and the PGI satellite medical center in Una had started functioning while their buildings were under construction.

The minister said that the Ayushman Bharat healthcare scheme initiated by Prime Minister Narendra Modi and the Himcare scheme launched by Chief Minister Jai Ram Thakur had benefited poor and underprivileged people, who had received free health services even for critical care.

He added that 4.25 lakh families had been registered under the Ayushman Bharat scheme and 1.16 lakh patients had received free treatment at a cost of Rs 139 crore.

He later inaugurated six residential quarters for health staff near the Una district hospital built at a cost of Rs 1.55 crore. He also inspected the ongoing work on the mother and child health hospital near the district hospital. The Union government is spending Rs 25 crore on the project.