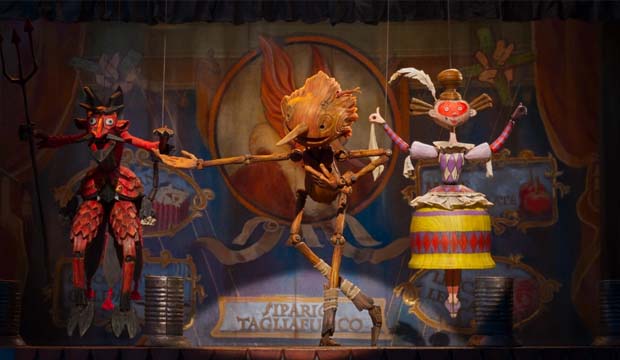 It’s no mystery why stop-motion animation is admired by critics and audiences alike. The extensive manual labor required for every visual composition keeps us connected to cinema’s tactile past, to an era when the term “special effects” referred to pyrotechnics and animatronics rather than CGI. Stop-motion features have a texture computers, as of now, are unable to successfully replicate.

CGI is a cheaper and, some feel, increasingly suitable alternative to stop motion—“Rango” and “The Lego Movie” mostly pulled it off, after all—but one artist who clearly understands the inimitable quality of stop motion, the beautifully imperfect aesthetic that’s produced by working with raw materials, is Guillermo del Torowhose “Pinocchio” was launched on Netflix December 9. It’s hard not to be romantic about handcrafted animation when AI is generating art and big budget films are predominantly assembled out of frame.

That the umpteenth iteration of “Pinocchio” can generate excitement among moviegoers is entirely a testament to del Toro’s status as an event filmmaker. Thankfully, this version—2022’s second—sets itself apart in more ways than the involvement of its official title’s venerated director, giving audiences an experience that, paradoxically, is both old-fashioned and stunningly modern. It’s fitting that stop motion, achieved by manipulating puppets, clay models, and other inanimate materials, would be employed to tell the story of a wooden boy that comes to life. Del Toro uses Carlo Collodi‘s 1883 novel, “The Adventures of Pinocchio,” as a vehicle to comment on Benito Mussolini‘s Italy, even literalizing Pleasure Island, where mischievous boys are turned into donkeys, as a center for fascist indoctrination.

2022 has been a benchmark year for the artisanal discipline. Three stop-motion films—“GDT’s Pinocchio,” “Marcel the Shell With Shoes On,” and “Wendell & Wild”—are in Gold Derby’s projected top 10 for the Best Animated Feature Oscar; “GDT’s Pinocchio” stands to become only the second, after “Wallace and Gromit: The Curse of the Were-Rabbit,” to win. The movie could also make history by becoming the first to get a nomination for Best Production Design. The half-hour special Netflix has released alongside the film, “Handcarved Cinema,” makes a compelling FYC ad that doubles as a love letter to the animators, concept illustrators, set and costume designers, engineers, cinematographers, and rig technicians who collaborate on films like the following nine to deliver a seamless cinematic experience.

“Chicken Run: Dawn of the Nugget” is being released by Netflix 23 years after the original’s theatrical run, which remains the best ever for a stop-motion feature ($224.8 million worldwide). Also ahead are two features from Laika—“Wildwood,” a fantasy set inside an enchanted forest, and “The Night Gardener,” a neo-noir written by “Ozark” creator Bill Dubuque. Travis Knight, Laika CEO and director of “Kubo and the Two Strings,” is set to helm both. It’s recently been reported that Guillermo del Toro and Phil Tippett have discussed reviving the former’s scrapped adaptation of HP Lovecraft’s “At the Mountains of Madness” as a stop-motion feature. Should these tentative talks manifest a shared creative effort, 2022 will only be a preview of what the medium has to offer.